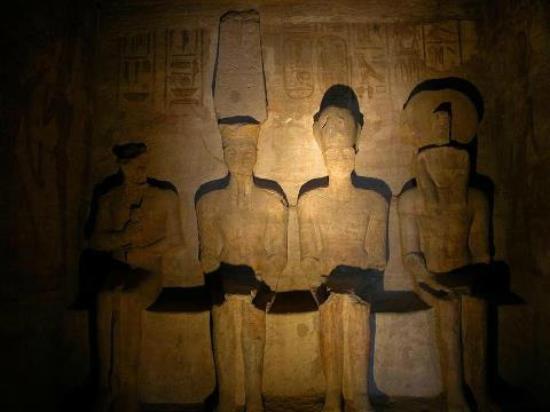 February 22, 2014, 5:30 am*: As I write this the sun is rising in Egypt, the sky is getting light, soon the rays of the sun will enter the darkness of Abu Simbel Temple, piercing the complete length of the halls, into the “Holy of the Holies” where it will illuminate the statues of Amun-Ra, Ramsis II, and Ra-Horakhty. The fourth statue, Ptah, is connected with the underworld so he remains in darkness even on this special day. This solar phenomena has been happening twice a year for 3,200 years and it is happening again on today, in just a few hours.

Video of the illumination inside the temple, good light starts at 1:28.

February 23, 2014*: I have been paying special attention to the Sun Day this year for two reasons; not only have our friends in Aswan been posting photos and videos leading up to the event including an International Folklore Festival, I am also planning for the group of JtE-4 to be in Aswan in 2015 to experience this solar phenomenon.

Photos and video of dancers and musicians enjoying Aswan, a Festival zeffah through Aswan, the Festival Show and the Abu Simbel Show and celebration were posted on Facebook, many of which I have shared to the “Journey through Egypt – JtE” Facebook page. ONTV covered the International Folklore Festival, the video includes clips of the dances. More photos can be seen on the Facebook page “Folk Arts Lovers” which is the official page for the General Directorate of Folk Art and the General Authority for Cultural Palaces.

ONTV coverage of the International Festival

The evening before the solar event Regional Governorate Troupes performed in front of the Abu Simbel Temple. In fact this blog was delayed as I waited for dancers in Aswan to return home and post photos and videos.

Journey through Egypt 4 happens next in Upper Egypt in February 2015: While I can’t promise that there will be an international dance festival next year, a performance and celebration by the Regional Governorate Troupes in the space in front of the temple has been in effect for years. And the sun entering the furthest reaches of the Temple twice a year has been like clockwork for 3,200 years. Interested in joining us in February 2015? Join our waiting list to hear when we open registration for JtE-3 & 4!

*Time and date in Egypt