Who is Nelly Mazloum? 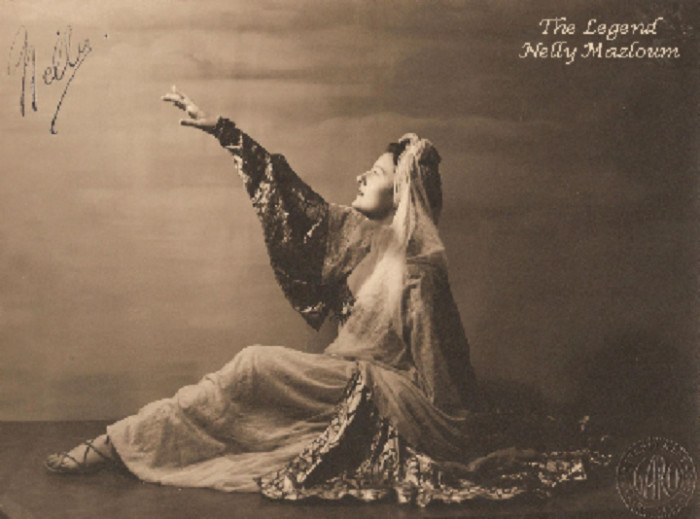 Who is Nelly Mazloum?

Nelly Mazloum was a film star in the Classic Black & White Cinema Era in the 1940’s-60’s, starting as a child prodigy in her first film was when she was 10 years old. Ms. Mazloum has a strong position in the Cairo film and theater dance history.

I was not only interested in Nelly Mazloum for her position as a film star and beautiful dancer, I was also fascinated that she had done folkloric dance research and formed a folkloric dance troupe in the mid-1950’s. (Firqit Reda and Kowmeyya both were started in the 1960’s.) I was also interested in her Raqs Hawanem (the dance of the ladies) research and how she would bring this dance of secluded upper class women to the stage.

“But woman also is what she chooses to be when she is prepared to take the responsibility for it.”²

As I continued researching I saw a bi-cultural woman deeply involved with the arts and entertainment in the changing times in Egypt. She was born in 1929 in Alexandria, Egypt to wealthy Italian-Greek parents, her mother being an accomplished pianist. Ballet helped her gain strength after polio affected her legs at 2 years old. Her mother became her impresario.

“As a child she danced at the famous Casino Opera, run by Badya Masabni” performing modern dance and classical ballet in the afternoon matinee shows for families, and staying to observe “the evening show of famous belly dancers like Samia Gamal and Tahiya Karioka.”

“On many occasions she appeared in front of King Farouk, in the same show as Samia Gamal and Umm Kulthum… [She] performed/acted in about 17 films. Of those, she performed oriental dance only in a few. … In 1948 Nelly Mazloum became the prima Ballerina of the Royal Opera House in Cairo (Dar Al Opera)… 1959-60, the Egyptian government founded the Egyptian National Ballet Academy under the direction of Alexei Jukov, who was assistant teacher of the Bolshoi Ballet School in Moscow … Mazloum was appointed by the Ministry of Culture to be his assistant for the protection of the Egyptian content of Classical dance. A year later the National Ballet Academy was founded and for three years she was Jukov’s right hand.”³

Nelly Mazloum in an Orientale/modern dance for film

According to her daughter, Marianna;

“In 1958 … Mazloum was the first to present folkloric dances on stage and her dance company was the first Egyptian dance troupe to record Egyptian folk songs and dances from many different and remote regions of Egypt and perform them on stage and on television programs.”4

“For many years she gave innumerable Folkloric performance in local theatres and in various television shows in Egypt… [with] her company the “Nelly Mazloum Arabic Troupe of Dancers.”³

Again, according to Wikipedia, but not the same years that my other sources state;

“In 1961 … [the] National Folkloric Academy under the direction of another Russian, Boris Ramazen who was the first assistant and dancer of the “Moiseyev Dance Company” in Russia,Mazloum was his bridge to the local talent. He came to her in the morning, to learn the traditional movements of folkloric dances which he then taught to the students in the afternoon. However, when she saw that the Russians adulterated the Egyptian style and made it more Russian, she stopped her collaboration, and quit the job.”³

In 1964, with a change of government in Egypt, many of her dancers found employment in the Kowmeyya Troupe. Nelly moved to Greece, as Nelly Calvo, where she taught ballet and modern dance. From 1985 until she passed in 2003, still in Greece, in a beautiful home with a dance studio Nelly taught Orientale Dance based on her “Nelly Mazloum Oriental Dance Technique” and “Vivicorporeal Psychosomatic Alignment Technique”. In these years she continued to feature the “Raqs Hawanem” and Pharaonic Dance.5

In this interview Anahita talks about her classes with Nelly, about the vision Nelly shared with her students on “Raqs al Ta’biry” (“Expressive” dance), “al-Hawanum” (dance of the upper class ladies), and Pharonic dance.5

From her book “Orientale Dance Technique”

But woman also is what she chooses to be when she is prepared to take the responsibility for it. The feminine touch must always remain in the heart and body of a woman, no matter how free and intelligent and enterprising she might be. A woman who remains close to the spirit of her real nature and uses this power without being used by it, can integrate herself in a man’s world with less friction and more respect.

Oriental Dance is a catalyst for self-made women who work hard and think straightforwardly. They need this sort of physical flexibility which will relax their nervous systems and keep their bodies sensitive to their individual natures without allowing them to become physically weak.”²

4 Marianna said during a lecture on Mazloum’s life and career in CID, UNESCO (International Dance Council), cited in Wikipedia.

5 For the “Journey through Egypt Dance Archive Project” I interviewed Anahita of Kiel Germany about Nelly Masloum. I had heard before that Nelly, who was well known as film-star in Egypt’s Black-and-White films, had started a folkloric dance company before Mahmoud Reda. As Anahita had been a loyal student of Nelly’s dance classes, and as a scientist Anahita keeps very complete notes, I asked if I could interview her.

9 Responses to Who is Nelly Mazloum?