The Different Dances of Egypt 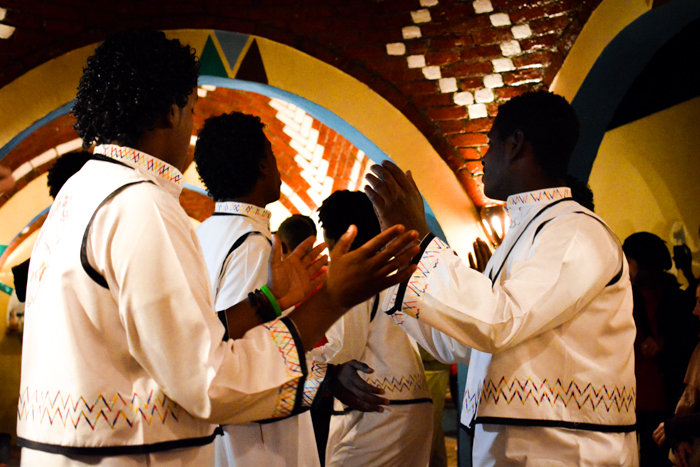 The Different Dances of Egypt

There are actually a wide variety of Nubian dances; previously the Nubian peoples were of different groups in many different villages scattered along the length of the Nile in both southern Egypt and the Sudan.  Some of the dances are from the Kensi people, some from Fadiki and some from groups who identify with Arab (Khaliji) immigrants.

The basic step most groups have in common is the right foot in front stepping down on the beat, the ball of the left foot in back stepping on the “and.” The arms move symmetrically together either forward and back or side and towards center.  Men lean forward from the hips, women stand straight.  Neither men nor women use hip-work, both can tilt their shoulders, women can also do upper torso lifts or drops.  In this region you can also find Arageed, Soki, and Nagrashod dance styles.

For dancers throughout the world, the dance of the Sa’idi region is probably the most well known “folklore” dance of Egypt.The most popular public dance of the Sa’id is Raqs Assaya (stick dance), whether the Assaya was twirled or held.

The basic footwork is a step to the side (count 1), then (on count 2) the other foot kicks across in front of the standing leg.  This movement can just be done out of happiness, or it can be “performed” by non-professionals in celebration of an event.  It is the main step for the representation of Sa’idi dance throughout Egypt and the world.

Also popular in the Sa’id is the Tahtib, a martial arts style contest that tests the cleverness and skill of two men fighting with Asaya. In stage performance the Tahtib can be referred to with dance.  In this region you can also find the Kafafa and a variety in-home dance styles.

Home-style female dance is the movement base for Raqs Baladi and Egyptian Orientale. When millions of dancers worldwide refer to Egyptian style Orientale dance, they are referring to Cairo.  Even within Egypt, other regions are aware of the steps and posture of the Cairo Orientale dancer, and probably can replicate it if not too shy.

Cairo is also home to both National Companies, Firqat Reda (started by Reda and Fahmy families with Mahmoud Reda director/choreographer) and Al Firqah Al Kowmeyya Al Fannon Al Shaabeya (the National Troupe of Artists of Folklore) where dances from Egypt’s regions are brought to the theater stage.  Cairo is also the main recording center of the Middle East, and their Orientale Film Stars and Night Club dancers are legendary.  On these stages you can also find the Baladi Awad and Tet Baladi  and a variety of neighborhood, Shaabi, dance styles.

Egypt’s Delta is home to a wide diversity of populations and their dance styles.

Even though the word “Fellahin” denotes a specific type of farmer no matter where in Egypt he is farming, in a dance program “Fellahin” would refer to the Delta farmers.  Inside these countryside homes, and within urban homes as well, there is a wide variety of movement, some of which is not represented on stage by the touring government troupes, including a twisting hip shimmy and a  front pelvic drop.

Alexandria had it’s own signature Orientale dance style – with more bounce and often sticking the thumbs out as a reference to dancing with knives.

The Delta also has at least two famous Ghawazee groups; Sumbati Ghawazee (famous for their “athletic style” including shamadan with splits and floorwork, and balancing a chair in their teeth) and the Ghawazee of Tanta (Tanta is more famous for their musicians and the fine nye that are made there.)

Originally this area was desert terrain with bedouin inhabitants.  With an international presence in the building and maintenance of the Suez Canal an interesting dance form developed; an international fusion of tunes played on a Bedouin instrument (Simsimeya), European style of hand-played spoons, and a variety of objects played as drums.  The dance form is singular in Egypt; the bouncy dance, often danced in “turn-out” is unlike any other dance form in the country.

A Bedouin Woman from the Sinai.

Dances take place during celebrations, such as marriages.  This includes the dance called “Daheya” – the men singing and clapping in a line can be done at any time, but the dancing can only be done during cultural ritual.  The Daheya is done by the extended family itself, not by local professionals.

The Sinai dances are represented by the Regional governorate troupe for Folk Art in Ismailiya on the Suez Canal.  Both National Dance Companies have a “Daheya” on their repertoire, but they look different.

Siwa people are of Amazigh (Berber) heritage and culture.  It is not easy to view the music and dance here due to Siwa’s very private traditional ways.

As was observed and documented by Tamalyn Dallal: The men’s arms are held straight out to the sides, a hip sash is tied very low on the backside.  The basic step is made to be viewed from the back, the backside makes vertical circles (side, up, side, down).  A additional hip movement is a strong down accent on one hip, standing with flat feet and slightly bent knee.

Mahmoud Reda, in 1965 observed the men in a different dance, outdoors and without the hip-sash they bent forward in single file, their arms relaxed at their sides except when clapping, their steps were bouncy and fast paced.  The women did not allow themselves to be viewed dancing.

Siwa dance on stage, by both National Companies, hold the arms bent in front of the body, hands relaxed, leaning forward from the hips, with no hip-sash the hips make vertical circles with a little jump sideways.  I have never seen Siwa dance represented in Cairo Orientale dance show.

Predominantly Awlad Ali tribe, of Arab origin, the bedouin of the Western Desert were once nomadic, and although now predominantly settled, still prefer to live in their tents.  This is the group that are famous, to people outside of themselves, for the Haggalah dance.

According to ethnographies on the Awlad Ali and the Haggalah dance; during the time of plenty of water in the spring, the extended family/tribe comes together and is therefore the time of marriages.

A Bedouin woman (from one to three women, plus a male chaperone) comes out of the desert and first dances in the tents with the women (of which we have no observation since these anthropologists were men), then the Haggalah woman/women goes outside and dances the Haggalah dance with the men.  The people of the tribe could not answer the anthropologist’s questions as to who she was or how she knows when to come.

A girl from the Beja Tribe of the Eastern Desert. Photo from Geeska Afrika

I have been trying to study these people for 20 years.  In all the Beja dances I have seen, the men carry a sword, the women do not.  One of the Beja dances includes men and women bending their heads backwards so that the face is parallel to the sky, then the torso undulates similarly to what western Belly dancers call a “camel”.  The men do this while holding a sword outright, but can also balance the sword flat on his upturned forehead.

Local professional female singers also do the “pigeon dance” with the face tilted up.

There are also men’s martial arts type contests with the sword, music on the Tambour (like the Suez Simsimiyya) is played.  The sword is swung to make your opponent flinch.

3 Responses to The Different Dances of Egypt