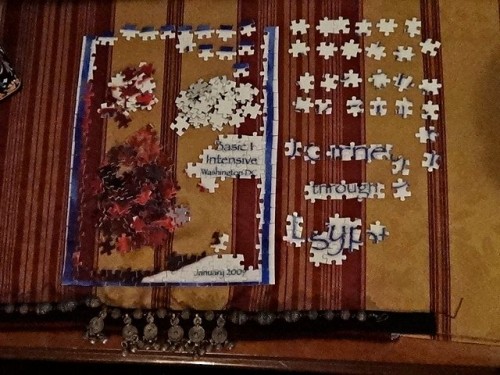 Last week we introduced the concept of looking at each region of Egypt from six perspectives; six tables, each with a jigsaw puzzle of information pieces. Click here to read Part I. The first three “tables” all had the dancers and their audience from the same area, speaking the same movement language; “we dance with/for us”.

The 1st table was “home-style” where normal people, not professional entertainers, dance with their friends or family.

The 2nd table was “local professional” with both the dancer and the audience are living in the same area, but the dancer identifies as a professional, paid, dancer.

The 3rd table was “Regional Governorate Troupe for Folk Art”, also called “Culture Palace,” who are managed by the Egyptian Ministry of Culture.  In contrast to the two National dance companies, the “Culture Palaces” are located in the areas they represent, employ local residents, most do not identify as being a local professional..

Now we enter the second three “Tables” where the dancers and audience are basically Cairo performers, Cairo directors, and Cairo audience, and are dancing about a different region.  This introduces fusion into the performance; each of the two National Troupes, and each Orientale dance artist fusing in their own way.

“We dance ABOUT them (in the new Folkloric category)”

“We dance ABOUT them” with Reda repertoire of movement
The population of Egypt was educated to this new Folkloric category by the films “Mid-Year Holiday” and “Love in Karnak” – the population was already familiar with a new category of movie star performers (including female dancers) from the Classic Black and White films.

Reinforcing the point that Firqit Reda was a wholesome family project, it was pioneered by the Reda and Fahmy families; Mahmoud Reda was the director, lead male dancer and choreographer developing a very specific repertoire of movement.  Farida Fahmy was the lead female dancer and named “the Daughter of Egypt” underlining the family identity.

Nadeeda Fahmy (Mahmoud’s wife, Farida’s sister) was the costume designer for the Reda Troupe.  Ali Reda (Farida Fahmy’s husband, Mahmoud’s brother) was film director and made Firqit Reda’s two famous films (listed above).  All the principals were university educated, of the educated elite, and had an international understanding of the arts.  The members of Firqit Reda are seen to be educated and special, the principals are film stars and often on the front covers of magazines.

The Reda troupe was active in fieldwork, both as documentation and as inspiration for Mahmoud Reda.  The songs were recorded then developed for stage by Ali Ismail.  The Reda Troupe started as a private group but became government after the Kowmeyya was formed.  The crafting of movement was done through the artistry of Mahmoud Reda, who was highly influenced by the Classic Black and White “Golden Age” Cinema, which had, in turn, been highly influenced by Hollywood films.

EXAMPLE: Your family and friends go the “Balloon” theater in Cairo and see the Reda Troupe, who were famous movie stars, perform in a show featuring dance and music from the different regions of Egypt, most of which you are probably not immediately familiar since they are not of your sub-culture.

(“The national troupe of artists of folklore”)


“We dance ABOUT them” with Kowmeyya repertoire of movement

Denise and Ahmed in performance in a Farmer’s wedding scene. Sometime around 1972. Members of Kowmeyya

Already in Egypt there were a few steps in the integration of folklore with the foreign idea of dance being performed by respectable, educated people with other options. There had been for sometime ballet schools in Cairo that often trained children of the elite, but folklore “of the lower classes” was not a classroom subject.

The “Golden Age” cinema started the mass re-education, showing that female dancers can also be famous stars and important people.  Cinema-star Niema Akef would occasionally dress and dance something of Egypt’s folklore in her films, in fact the government wanted Mahmoud Reda and Niema to be partners in dances that included folkloric themes. Another cinema-star, Nelly Mazloum, also developed a performing folkloric troupe and later, for a moment, almost played a role in the development of the Kowmeyya.

After the 1952 revolution Egypt ruled itself for the first time in 2,000 years and Egypt began to make a conscious effort to establish a national identity. Firqit Reda was formed in the mid-1960’s and began performing at many Egyptian state events, causing the government to believe that a government owned Folkloric Dance company was needed. However, Firqit Reda wished to remain privately owned troupe so the Egyptian “Ministry of Culture” employed Russian experts with the goal of developing a National Dance company of Folklore.

These Russian experts in Ballet and Character Dance had previously assisted in the development of other national troupes in other countries.  They designed a training program, a repertoire of movement, choreographies, trained a group of dancers, and then handed over the troupe to Egyptian directors to continue.

The population of Egypt was educated to this new Folkloric category by the education of children through new government sponsored folkloric dance schools, who then auditioned for inclusion in the performing troupe.  To further educate regions about each other, there were tours of the National Troupes inside Egypt.  There were also dances where the government would ask both troupes to educate by dances; such as the acceptance of other regions as a larger entity of Egypt, and later to help form a positive public opinion for the high dam.

Denice and Ahmed Enan, now living in Canada, and Fatin Salama, now living in the USA, were all dancers of the Kowmeyya. All of these founders and featured dancers are well educated and from good families, which was part of the message of the new folkloric category.

EXAMPLE: Your family and friends go the “Balloon” theater in Cairo and see a show performed by the famous Kowmeyya Troupe, it includes dances and music from the different regions of Egypt, most of which you are probably not immediately familiar since they are not of your sub-culture.

“We dance ABOUT them (in the traditional entertainment category)”

The larger category here would be Cairo entertainment media, which touches most of the Arabic world.  As that would be a huge subject, for our purposes we will concentrate on the Orientale Dancer’s show in Cairo.  She is not known for doing fieldwork and she may rely on Cairo stereotypes since her audience is Cairo based.  Starting as the National Troupes rose to fame in the 1960’s and continuing currently, many Orientale dancers surrounded themselves with Folkloric dancers, regional musicians and singers, and often offered a folkloric tableau.  This in turn eventually affected the Orientale Dancer, fusing some regional home-style movement with Orientale (Sa’idi heel drop and Haggalah walk for example) and some National and Reda Folkloric combinations.

EXAMPLE: Possibly you only get to see an Orientale Dancer on DVD or YouTube, since their shows in Night Clubs are very expensive. She performs in a show featuring dance and music from Cairo, possibly she dances one tableau from one of the regions of Egypt which you are probably not immediately familiar since it is not of your sub-culture.

If we open this discussion to Egyptian dancers who teach internationally, the influence on the Orientale Dance from the National Troupes is currently stronger than ever.   As the dance leaves Egypt, the country of origin, moving across the sea where the dancers are not Egyptian, and then even more removed where the audience is not Egyptian; we create more tables.  But in the scope of this study of folkloric dance, Egypt is as far as we will take it.

Why is this important?

In Egypt there is not only one type of dancing, one category of dancers, one “right” way of moving. Often different categories of dances will have different costumes, movements and use of performance space.  So the concept of six tables, each with their own jigsaw puzzle of pieces of information, can help us understand what we are viewing.  As dance students we can prepare more for the workshops of visiting Egyptian dance teachers.  As choreographers we will be better informed and possibly more inspired by increasing our knowledge of each of these tables.  As an informed audience we will be able to widen our view from just steps, to the rich cultural meaning in which it blooms.

END_OF_DOCUMENT_TOKEN_TO_BE_REPLACED
What If We Viewed Egyptian Folklore As A Puzzle?
The Siwa Oasis & A Project Announcement

4 Responses to Part II – What If We Viewed Egyptian Folklore As A Puzzle?