“Blessing of the River” Part II – A Nubian Baby Ritual 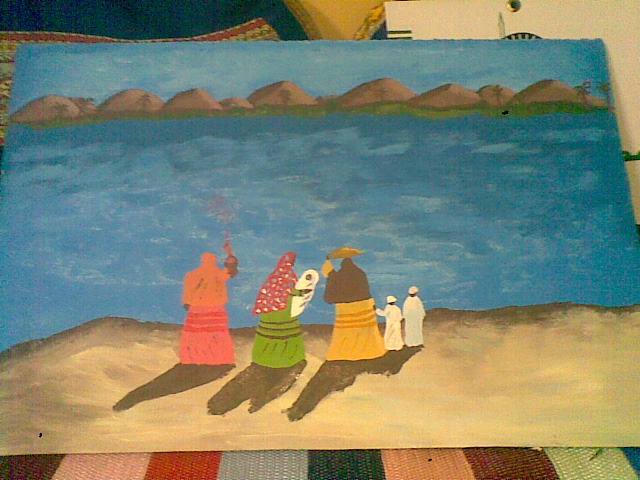 “BLESSING OF THE RIVER” PART II – A NUBIAN BABY RITUAL

This last December when we visited the Nubian House Luxor, I looked for the “Blessing of the River” carpet. It had been sold, and I missed the story. Now Mr. Gamal has painted this scene for us, and he also forwarded the video we saw last week.

Last week we saw the “Blessing of the River” video, now we will continue with a couple of applicable concepts.

Normally in the sabou’a ritual the women of the family celebrate the week-old baby. With different Nubian groups some celebrate on the 3, 5, or 7th day. Fadwa al-Guindi ³ observed some Nubian groups sequencing both the sabou’a and then the “Blessing of the River” after her confinement. At the sabou’a they go to the Nile where they offer dishes of specific foods to the malayket-al-bahr (river angels), after which they fill the dishes with river water and bring them home.

“The river angels [in these dishes of river water] normally remained in the house of birth for 40 days, until the ceremony marking the end of the mother’s confinement took place.”

Other Nubian groups do not do the sabou’a, only the “Blessing of the River” after their confinement.

Fadwa al-Guindi³ observed the Nubian population in Dahmit in the early 1960s;

“Within the religious belief system there existed a subset of beliefs and rituals focusing on a community of supernatural beings existing in the river Nile and associated with goodness and benevolence only. These beings were called “malayket-al-bahr” (river angels) … mainly related to the women’s domain of ritual experience.”³

During the Nubian sabou’a and “Blessing of the River” the malayket-al-bahr are fed and called to, often Nile water is brought back for both ritual washing of the mother, to be sprinkled in the house “to fill [it] with life” and for keeping in open bowls. If one drops gifts or items in the bowl, the Nile water and the good spirits in it dispels any evil spirits.

One can also clean energy by staring into the bowl of river water especially at the new moon. Among the “Hofriyat”3: p102 during the new mother’s confinement

“a bowl of Nile water … is placed outside the door to [her] room … her visitors must first look into the bowl, after which they may enter the room with impunity.”

The video had this description:

“Movie Reviews Alnobin [al Nubian] celebration ceremony in southern Egypt Newborn display all the ceremony in order since the exit of the parents and relatives to the newborn river even ignite a candle and throw him in the river blessing.” (Google Translation)

This video is titled “Sabou’a” but it could also be the 40 day “Blessing of the River”. With its overlay of Nubian music, the filming of this is a bit theatricalized; the camera and crew altered the ritual a bit. According to those I asked; the parts of the ritual done by the women were authentic, when men were acting it was an add on for the film.
:00  The video starts with a woman carrying the ritual food in a basket on her head, followed by the mother with baby, followed by female family, neighbors and children. Normally men would not be there, but with a video camera-person and crew filming the women, of course it would be normal for a couple men to supervise the situation and make sure the women and children were protected.
:48 The “old lady” throws lumps of food into the Nile. Most accounts say that she throws 7 lumps, this video only shows two of them. An “old lady” has more knowledge and is respected for this.
:58 The “old lady” talks to the camera, talking about praying for good husbands for the young ladies, as the young ladies laugh and smile behind her. Her words are translated into Arabic, since they are probably in one of two Nubian languages; Kensi or Fadiki. We momentarily see the mother and new baby. The lady continues talking, then she returns to throwing food into the water to call the malayket-al-bahr and fish.
1:35 Water is collected, the baby’s face is washed
1:44 Women scoop up the river water, notice they are wearing the jarjar black lace overdress.
1:47 Children eat the sweetened milk-rice (after lumps are thrown to the river), then women join them.
1:54 Ritual food dishes are washed in the Nile
2:01 It is part of the ritual to send a little boat carrying some ritual food into the river, it is a film add-on for men to put a candle in it.